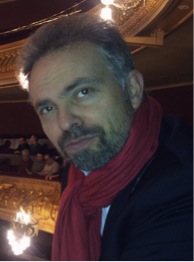 Born in Paris, to a family of artists, Jérôme Angot took his first piano lessons at the age of four.
He continued his training at the Paris Conservatory and at the Alfred Cortot Normal School of Music in the class of Jacques Lagarde. A singer, he holds a soloist's diploma and a master's degree in singing from the Hoogeschool van der kunsten in Utrecht and from the Sweelinck Conservatory in Amsterdam, and was part of the class of the great baritone Udo Reinemann. He later became Mr. Reinemann's agent and was part of the artistic direction of his Festival "Les Heures Romantiques" in Touraine.

Based in Amsterdam and Paris, Jérôme Angot has been working as an agent for about fifteen years, devoting himself more particularly to artists from the world of opera (singers, directors, conductors, singers ) and to a limited number of instrumentalists.

His qualities as a musician and artistic administrator quickly established him as a key figure in the professional music world and enabled him to effectively advise artists, and also artistic directors. He joined the Paris Opera Competition in 2015 as its artistic director.